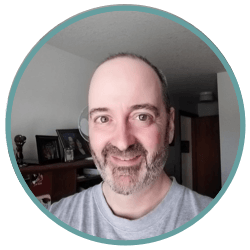 We recently received this lovely feedback letter from Brian a long term radial keratotomy patient from Oregon whom I have had the pleasure of knowing for about a decade and a half. Brian has done a wonderful job of chronicling the history and progress of the Laserfit Lens. Thank-you Brian.

I’ve known Dr. Gemoules a long time.  I first met Dr. G in 1999 when I was involved with Surgical Eyes, a non-profit foundation and website dedicated to helping people like me who had suffered bad outcomes from refractive surgery like LASIK, PRK, and RK.  In my case, RK (radial keratotomy) left me with permanent fluctuating vision, glare, starbursting, loss of contrast sensitivity, recurrent corneal erosions, dry eyes, and a whole host of other difficult problems.  Dr. G was one of the first doctors who pitched in and helped our foundation, tirelessly volunteering hours of his non-work time to answer patient questions and educate us on the real causes of what was going on with our vision – advice that was nearly impossible to get from most eye doctors back then.  They seemed much more interested in performing more surgeries on new patients than dealing with the aftermath when it didn’t work!.

Well, Dr. G has truly dedicated a large part of his career to dealing with that aftermath.  By the time he found us at Surgical Eyes, he had been working to rehabilitate RK patients in Texas for several years through the innovative use of RGP (rigid gas permeable) contact lenses.  When I first visited Dr. G in the early 2000’s, it became clear to me that rehabilitation was really possible when he designed lenses for me that were actually comfortable to wear and cleared up a lot of my fluctuation and starbursting problems.  I’ve continued to see him throughout the years, and during that time, I would say is he has truly developed the panacea of lens technology and fitting so many of us have been looking for after failed refractive surgery.

Combining precision fitting and design techniques he pioneered with highly advanced lens manufacturing processes that are now available, Dr G can do two critical things that have in the past been very difficult for post-surgery patients seeking a return to “normal” vision.  First, through the use of measurements and design tools that model and map the entire eye surface, he can create a lens that is so thin and precisely contoured to your own anatomy that (speaking from my own experience) you really cannot feel the lens at all on your eye.  Second, using advanced measurements of the optical aberrations in your eye, he is able to design and manufacture optics into his scleral lenses that cancel out aberrations that are specific to your unique eye.  That means that poor contrast sensitivity, starbursts, glare, and other nasty visual phenomena that cannot be cleaned up by glasses or conventional contact lenses are in many cases, completely negated by Dr. G’s lenses.  That’s one of the reasons a lot of his patients wind up with better vision (e.g. 20/10 now vs. 20/20 before) with Dr. G’s lenses than they had previously.

The results, for me personally, have really been amazing.  I was happy with my results from RGP lenses 4 or 5 years ago, and they did so much to give me back a normal life.  It was about that time I visited Dr. G again and tried out his new Biometric scleral lenses, as they were then called, with the aberration-cancelling technology.  Driving around north Texas late in the afternoon after receiving my first pair at his office earlier in the day, I noticed an amazing thing happening.  The normal, slight deterioration of my RGP lens vision as dusk settled in did not occur.  In fact, it seemed to me, I was actually starting to see better.  Remarkably, as night settled in, I found that I was actually enjoying driving around at night and could clearly see low contrast items on top of low contrast items everywhere.  It was like Dr G had given me a pair of Army special forces night-vision goggles!

Maybe what I’m describing is nothing special and is how people with normal eyes see things all the time, but for me, it has been nothing short of astonishing to see this well (and comfortably), considering all that I’ve been through.  I did not think it was possible.  I hope the news will spread about the benefits of Laserfit Lenses for patients like me and others who have similar problems finding optimal vision and comfort due to their corneal conditions, and that more doctors will be able to learn about and use this life-changing technology Dr. G has pioneered.