You are here: Blog / Keratoconus / Laserfit® Helps a Future Veterinarian with keratoconus Achieve His Dream 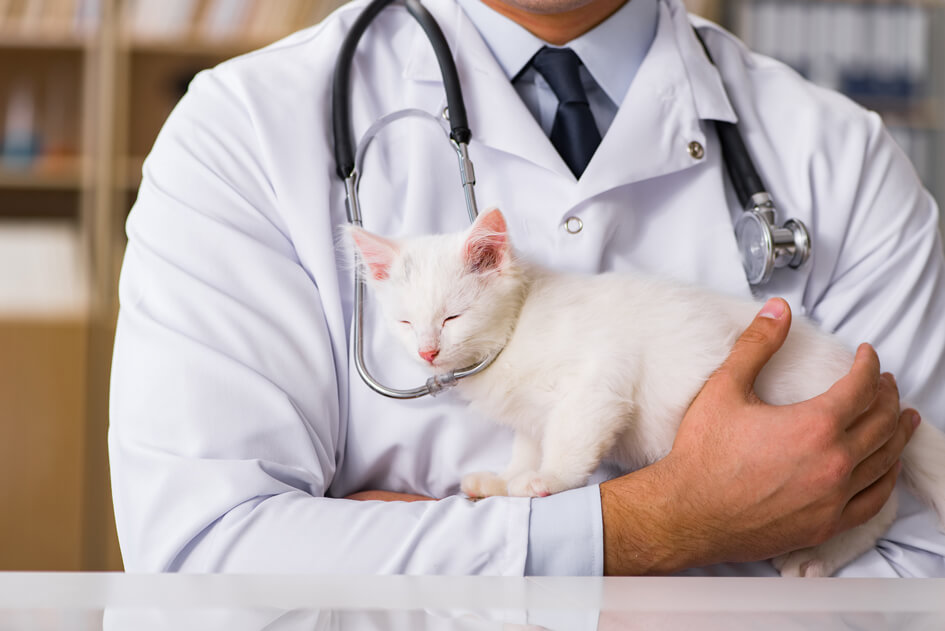 “This week, two really good things are likely to happen for me,” said my new young keratoconus patient.  “I will get really good results with your lenses, and I will be accepted into the veterinarian school of my choice.”  While I could not guarantee the latter, the former was surely in my powers. It was clear to me that this young man was going to achieve all of his goals, otherwise he would not have bothered to travel all the way to Coppell, Texas from a faraway state.

Thinking that he was a habitué on one of the keratoconus pages on Facebook, I asked how he heard about us.  Surprisingly, he said he did not have a Facebook account. He told me that one day he decided that he wanted better vision than he was getting from his current doctor, and was looking on the internet.  When he found Laserfit, he decided there were four or five ways we offered something better than what he had, and also someone who would work harder to help him get better vision.  I learned that he had a beloved horse and loved going for long rides in the desert. While riding a horse in the desert was not too demanding of his vision, it surely played havoc with his RGP lenses. He was hoping to ditch those in favor of sclerals. However, studying to be a veterinarian would be visually demanding, and so he had to have good vision as well. Here was a young man who not only could take the reins of his real horse, but could take the figurative reins of his future.

What I found was a moderate to severe case of keratoconus in his right eye, along with a central corneal scar.  His left eye seemed to be only moderately advanced, and he indicated that his left eye could be corrected much better than his right eye.  He had crosslinking done on both eyes about 12 months earlier.  Indeed, with over ten diopters of myopia and 5 diopters of astigmatism, his right eye was correctable to only 20/70 with eyeglasses. With only 2 diopters of myopia and slightly more than one diopter of astigmatism, his left eye was only correctable to one line better, i.e. 20/60.

Using the prescription from his former optometrist as a starting point, we were able to achieve a perfect fit of both lenses on the first day. The vision with those first lenses was 20/40 in the right eye and 20/25 with the left eye. We had not yet used a wavefront-guided correction. When we used wavefront corrected optics he was ultimately able to see 20/20 letters with each eye, and with 7/9 on the Titmus, he showed good stereopsis. The real kicker was that we achieved a better quality of vision in his “poorer” right eye than with the left eye. 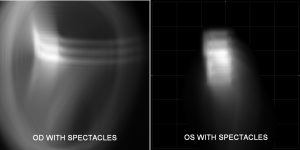 Snellen letters as they would appear with regular spectacles. 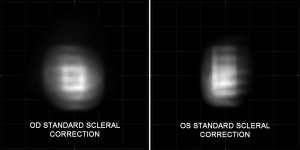 Snellen letters as they would appear with standard scleral lenses (ordinary optics).

Snellen letter as it would appear with wavefront-guided Laserfit lenses.