You are here: Blog / Corneal Ectasia / Emese : Triumph of the Human Spirit

Today we share Emese’s story, which is a testimony to the amazing triumph of the human spirit in the face of adversity.

Emese is truly an inspirational person, having suffered through a cascading effect of severe health issues, she somehow still manages to retain an awe-inspiring attitude and an infectious zest for life that is very rare to encounter. We have been very blessed to have met her and to help restore her vision with Laserfit sclerals.

In June 2011, while backpacking across south-east Asia, Emese stopped off on a small island in Indonesia to go scuba diving. This ill-fated decision ultimately turned her life into a nightmare. 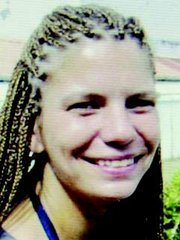 After surfacing from her dive, she lay on the beach writhing in pain mistakenly thinking that she had the bends. It turned out the actual culprit was poorly mixed oxygen in her diving tank resulting in severe carbon monoxide poisoning. For the duration of the dive, her brain had been deprived of oxygen, setting in motion a series of debilitating health conditions.

Stuck on the tiny remote Island with no medical care, Emese was left in the dive bungalow for 2 days with the full expectation that she would die. It resulted in her getting secondary Parkinson’s disease and a progressive neurological disorder called dystonia. The dystonia caused her legs to be so crippled that she could not stand up for 2 and a half years. She told us she remembers thinking at the time “oh well I can’t walk but at least I can see”.

I remember thinking at the time, oh well I can’t walk but at least I can see.

Emese had previously undergone LASIK surgery back in 2005 and until the time of her accident in 2011, her vision had been 20/20. Following the accident and anoxic brain injury causing optic nerve damage, her vision had remained stable at 20/30.

If things could not get worse, in 2016, Emese noticed that her vision was deteriorating and things were getting fuzzier and fuzzier. When her vision worsened to the point of not being able to see her computer screen or drive, she went to a specialist and was diagnosed with post-LASIK ectasia. Her vision had now deteriorated to 20/100 in the one eye and 20/200 in the other. 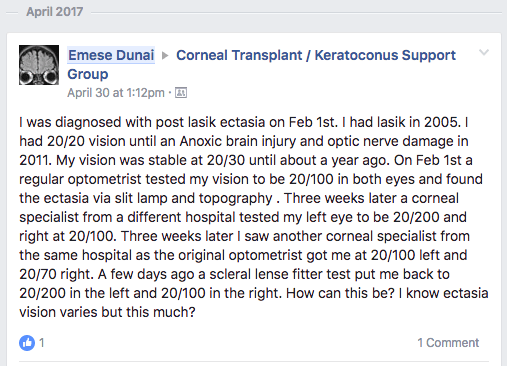 After stumbling upon Emese’s moving story on Facebook, Dr. G decided to reach out to her and offer his help in restoring her vision through the use of Laserfit lens technology. Taking on such a special needs patient could be difficult for the average practitioner. Dr. G’s unique experience with aberrated eyes would enable him to know how much of Emese’s vision problem was caused by the distorted optics versus the nerve atrophy, and the patented wavefront guided lens process would ensure the best visual result. But first Emese would have to make the long trip from Oregon to Texas for the treatment.

Emese was determined to make the trip with some miles she had saved on Alaska Airlines. When she arrived in Texas, her sister flew in from Michigan to give her moral support. The Laserfit preferred hotel was also conveniently located next to a health club with a hot tub and a sauna, two things that Emese needed to relax her tensed and painful muscles. To her great surprise, the hotel provided Emese with an electric scooter so she could go shopping and run errands.

The fitting process proceeded smoothly and without incident. The LASIK ectasia had caused her vision to decline to 20/100 and 20/200 from 20/30. With glasses she could barely read 20/60 out of one eye, still not good enough to drive. The first set of lenses with conventional optics was only able to improve her vision to 20/40, which is good enough to drive. However, this meant a net “loss” of vision of one line.

Using aberrometry Dr. G. was able to tell that the optics were still not optimal. With wavefront optics, Dr. G. was able to improve her vision to 20/20 in one eye and 20/25 in the other, and the aberrations were reduced to better than average. So instead of leaving with a net loss of one line of vision as would have occurred with ordinary scleral lenses, with Laserfit she was actually able to realize an improvement of one to two lines of vision, and the original diagnosis of amblyopia from optic atrophy was blown away.

Emese’s motivation and drive to succeed, could serve to inspire and motivate countless other patients who find themselves in seemingly hopeless situations

Dr. G. and staff considered it a high honor and felt their lives enriched by meeting Emese, whose motivation and drive to succeed could serve to inspire and motivate countless other patients who find themselves suddenly in seemingly hopeless situations. They will continue to cheer her on as she pushes through each day, and each day is one day closer to her goals of helping others. Thank-you Emese for sharing your story.