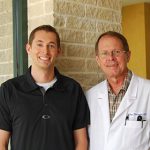 Joseph is a Texas local and is lucky to be alive. About 8 or 9 years ago he came down with a rare case of TENS - or Toxic Epidermal Necrolysis, a severe form of SJS or Stevens Johnson Syndrome. It is a reaction to a chemical or substance, usually sulfonamides, that causes sores on the skin and mucus membranes, then sloughing similar to third degree burns.

Joseph survived this often fatal condition, but with scarring of the conjunctiva and sores on and around the eyelids leaving him with severe dry eye. After undergoing reconstructive surgeries, he still suffered as a result of the scar tissue. One of the challenges was that the worst eye was unable to open widely enough for a large lens. We fit him with a normal size mini-scleral on his better eye first. After he got the hang of that, we scanned and fit his right eye with a smaller lens, which he was able to wear without any trouble. He now has his life back.