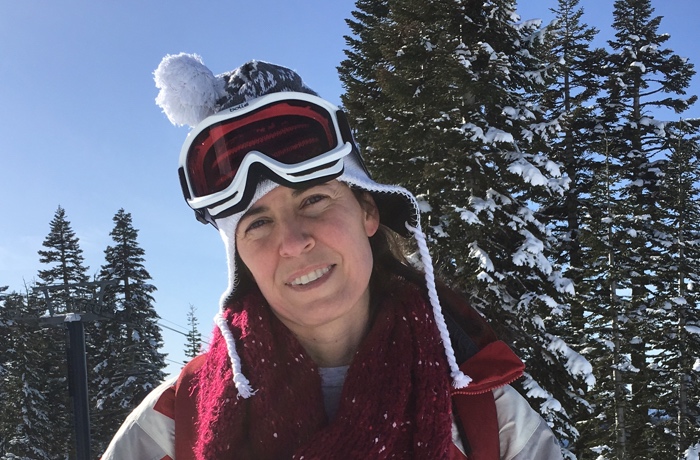 Thank you Annelene for your lovely letter and beautiful photo of you and your daughter skiing. Annelene had spent many long years in depression after her LASIK surgery. During our online discussions, it was very clear to me that she was not only angry, but very skeptical about our ability to help. Her past experiences with solutions was disappointing to say the least.

This is the problem we encounter time and again. Patients seek solutions and are met with disappointing results and so they come to us as a last resort. If only she had come to us a long time ago, those many years would not have been wasted.

In February 2010 I had Lasik surgery done on my two eyes. I woke up the day after with what I knew to be a completely botched eyesight in both eyes: pretty much zero night vision, very poor low-light vision, total loss of depth perception, and an overall massive loss of acuity and contrast. The world simply for me had become grotesquely deformed, ugly, and I could no longer trust what I saw through my eyes. I was mortified, knowing that this was final, irreparable — and not the least awful part of it was a total denial on the part of the staff at the Lasik surgery center that there was any vision loss. “It will heal” they kept saying. It never healed.

From the day of my Lasik surgery, my life became a kind of a living hell where looking through my eyes was a non-stop horror show from when I opened my eyes in the morning to when I closed them at night. There was no other escape (besides sleep) from this blurry, confusing, grotesque, permanent hellish state. I became unable to move around at night, unable to drive in the hills or mountains, unwilling to hike or run in a world in which I could no longer trust what I saw. I could barely see inside homes (low light) or at night. Reading, books or screens, was a strain. I could no longer clearly see the faces of my loved ones. Feeling different and diminished, handicapped (I used to call my predicament ‘my invisible wheelchair’), I lost confidence in my personal and professional life. I worked less. I lost a lot. I had permanent headaches from poor vision and became permanently depressed from this very literal ‘brokenness’.

Over the years I tried regular contacts (didn’t work), glasses (didn’t work) and reverse geometry rigid gas permeable lenses (you guessed it: didn’t work) to try and improve things. Nothing improved my vision. The glasses somewhat improved the depth perception but made things worse in the evenings or at night, and it gave me headaches to switch from glasses to no glasses – so they basically didn’t work. I was also quite resentful to have to wear glasses post-Lasik in the first place as, pre-Lasik, I had worn contact lenses very successfully all day every day for about twenty years. And of course I was resentful that I was spending money on ‘cures’ but to no avail.

This living hell lasted for six and a half years, until, miraculously, via another Lasik victim’s referral, I stumbled upon the website of Dr. G. I could tell from reading the website that Dr. G, unlike, apparently, the Lasik surgeons and eye doctors I had talked to so far, understood what I was experiencing and could do something about it. I decided to take the plunge and signed up to spend a week at Dr. G’s office in Coppell to be fitted with laserfit scleral lenses.

I will never forget the day of Thursday, May 26th 2016, as it is and forever will remain the absolute best day of my life. I stepped out of Dr. G’s office with a pair of custom-fitted lenses through which I could see the world again – for the first time in six and a half years. All the depth and textures and contrast and sharpness and vibrancy of the world were there again for me to revel in – the trees, the flowers, the grass, the bricks, the stones. And, because I went to a local BBQ restaurant that night to celebrate (it’s Texas!), the texture of the wooden tables, of the meat and other foods, the grains of salt and pepper, the low-light interior of the restaurant, of which I could see, through my eyes, ABSOLUTELY EVERYTHING. That’s after six and a half years of being, basically, half-blind. Nothing short of a miracle. I was stunned and ecstatic as I thought I would never see again and there I was, seeing again!

Another best day of my life came just a few days later when, back in the San Francisco Bay Area where I live, and now able to wear my new lenses for extensive periods of time (ie all day long), I took an ALL-NIGHT drive through the streets and highways of San Francisco, and, for the first time in years, I could see the night lights, the street signs, the moon, the stars, and I could actually DRIVE AT NIGHT (I had been pretty much unable to drive at night since Lasik, which greatly limited my mobility and autonomy, and made me dread the long and dark winters).

In summary, Lasik made me handicapped, damaged, unable to see the world properly and turned my life into a permanent state of misery, a ‘living hell’, and Dr. G’s lenses simply restored my vision to what it was before Lasik – i.e. pretty much a perfect vision. I was ‘blind’, and now I see. Thank you Dr. G! You have given me back my life.

I recommend Dr. G to anyone who, like me, has had their vision damaged by Lasik surgery, or has had their corneas damaged in any way. Dr. G is a one-of-a-kind miracle worker who literally gives people their eyesight back and you will not regret it.